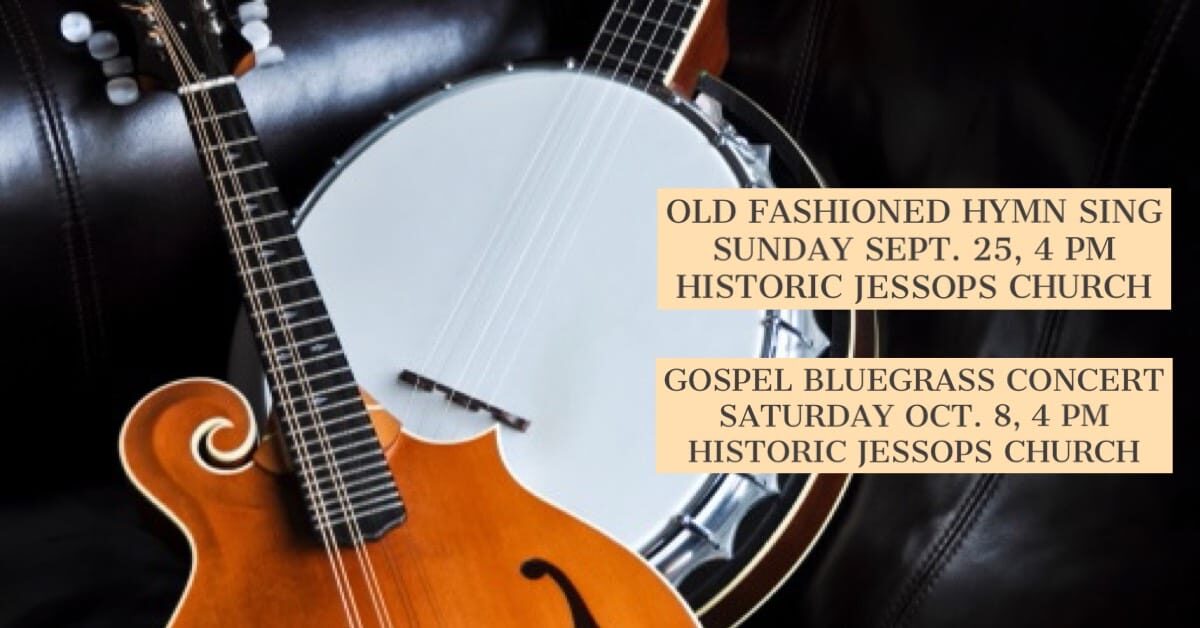 Jessop’s United Methodist Church dates its origin to the year 1809 when the congregation met in the homes of its founding members. Then in 1811, John Gorsuch, Jr., on the first day of March, conveyed a hilltop location to the original trustees for one dollar.

The first trustees were Charles Jessop, Charles Gorsuch, John Hatton, Phillip Lettig, Robert Fisher, Samuel Willis, and John Watts. The deed from Gorsuch specified that the purpose of the donation was “for the uses and purposes of erecting thereon a house or houses for the accommodation of a school and teachers thereof, and also for the use and benefit of the society of Christians commonly known by the name of the Methodist Episcopal Church of the United States of America, according to the rules and discipline, which from time to time, may be agreed upon by the ministers and preachers of the said church or society of Christians at their general conference in the United States of America, and that such ministers and preachers belonging to the said church or society, and none others, shall be permitted to preach and expound God’s Holy Word therein.”

The tract name of the church site was “Round-a-bout,” which seemed to serve as a place name along with the steep curved ascent to the site, Fifteen Mile Hill. Charles Jessop was one of the contractors for building the turnpike version of the road to York in 1809 and was familiar with the terrain.

It was customary to name chapels for the person or family that bore most of the expenses and no doubt Charles Jessop with his wealth and skills was responsible for carrying out the project. Jessop had been an iron master, a road contractor, bridge builder, farmer, and mill operator. He owned the Beaver Dam Mill (later called Shipley’s) and another mill during his career. At the time of building the chapel, he lived at a great house on Paper Mill Road called “Vauxhall” that was eventually condemned to develop the Loch Raven watershed. Jessop kept a farm ledger where he recorded some of his business transactions and also social notes on births and deaths in the vicinity; he also wrote a few paragraphs of autobiography, where he noted that in his youth he had drank to excess, used profane language, and engaged in brawls and wrestling matches, not the sort with established sporting rules. Jessop’s spelling is difficult to unravel but he expressed himself well.

The 1959 parish history reports that the original church was rectangular, built of stone, about sixty feet in length, forty feet in width, perfectly plain with low ridged roof, and a series of windows along its east and west walls and with small entrance doors at the south end. It was heated by stones, lighted by oi 1 lamps, and “was comfortable and commodious for the congregation that attended services of worship there.”

The church historian speculates that the building doubled as a Sunday School, which had been called for in the original deed. Still further remodeling took place in 1854. The structural history of this period, the original church project and the remodeling are extremely shadowy and there is nothing to quote from primary sources.

If the 1811 church was as plain as early Americans could make it, the third phase of construction resulted in a remarkable work of art in the popular Shingle Style that was sweeping the Gilded Age. The local weekly reported in late October of 1886 that the Jessop congregation was meeting above Wright’s Store at Shawan Road and York Road during the reconstruction; they had just been offered the use of the Ashland Presbyterian Church. · Wright’s Store was the one later operated by the Aiken and Pinkner families and then saw its final use as a camping supply shop, being demolished August 4, 1988.

The last week of October in 1886, the Towson weekly gave a detailed account of the rebuilding process, which clearly shows that the walls of 1811 or of 1854 (or both) were incorporated into this handsome building that survives 106 years later.

Philopolis, 8th District. improvement of Jessop’s Church is progressing The improved edifice wi 11 be about 40 feet in height with a large belfry. A vestibule will be added, 9 feet in width and 30 feet long with arched doorways on the right angle corners. The walls are raised 3 feet and the interior stripped and replastered. The interior will be open to the rafters, which will be finished in diagonal panels. There will be four dormer windows in the roof, two on either side The gallery will be removed and the roof will be covered with slate. The gable ends will be shingled instead of stone, as formerly. The whole cost will reach about $3,000 …..

The reopened Jessop’s held its first service on May 29, 1887, with Bi shop Andrews preaching the morning sermon. The afternoon sermon was preached by the Rev. A. J. (or W. J.) Gill. One Towson paper reported:

The repairs to the church cost about $3,800, most of which has been collected leaving but a very small amount unpaid. The larger portion of the collection ·taken at night was donated by Mr. Edw. Austen, who is a member of the Baptist Church.

The other Towson paper’s Philopolis correspondent reported in much more detail and tied the project to a notable city architect and member of the AIA:

Jessop’s M. E. Church, which has undergone improvements by raising its side walls about three feet, extending the roof to a height of forty feet, on which there· is a belfry of more than twenty feet, in which was placed a bell weighing 800 pounds, also by the addition of a vestibule nine feet wide and enlarging the windows by placing transoms over them, the exterior repainted and penciled, new pulpit, new pews, and new carpeting, neatly and beautifully frescoed and the windows all replaced with pretty colored glass, was reopened on Sunday last with interesting services Those prominent in its erection &c. , were Mr. Joseph S. Underwood, contractor, Messrs. Diven, Schultz, and. Smith, masons, Mr. John E. Diven, painter; Mr. William George, frescoes; Mr. B. B. Owen [sic], architect. Messrs. Murphy & Gernhardt furnished the glass, Messrs. Joseph Thomas & Son the furniture, and Crone Bros. the carpeting; The organ was from Sanders & Stayman. The congregation is surely well repaid for their efforts in making the improvement and have done no more than what the spot or beautiful elevation where the church stands is worthy of. They are greatly indebted to all who have given them encouragement and financial aid.

The Philopolis correspondent also noted that the pulpit chair had not been delivered in time for the reopening. Lime for the project had been donated by the firm of Shipley & Parks, Texas, Md. The congregation celebrated the centennial of the first homes meetings on December 4, 1909. The 150th anniversary was celebrated with a homecoming service on September 20, 1959. That year, a well printed parish history was published with the portral. ts of Charles and Mary Gorsuch Jessop. Much of the same material was reused in the 175th anniversary booklet for the services held on September 9, 1984.

Now Jessop’s is only used for occasional services but the building is intact, the cemetery well cared for, the splendid church a combination of 1811 foundation walls and 1886 exuberant timber construction, crowning one of the most scenic hilltops in the county. 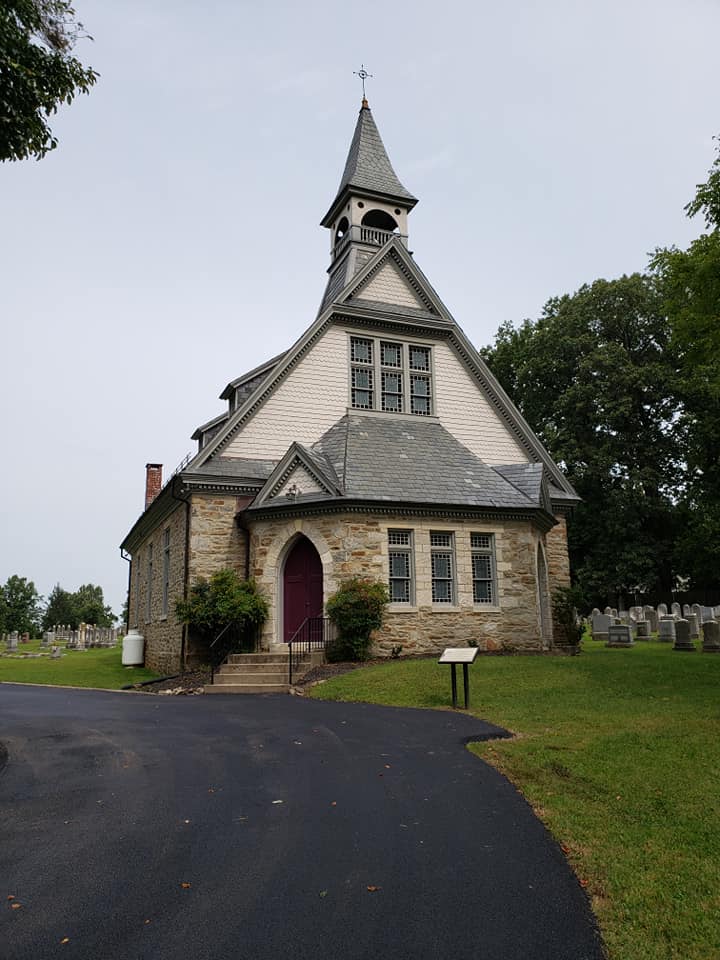 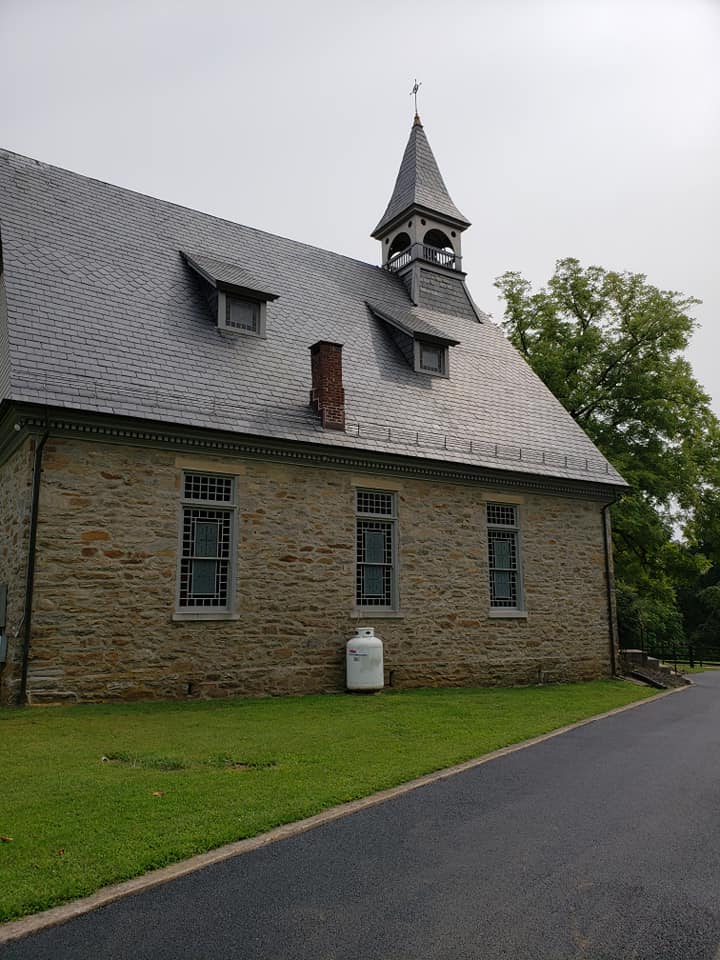 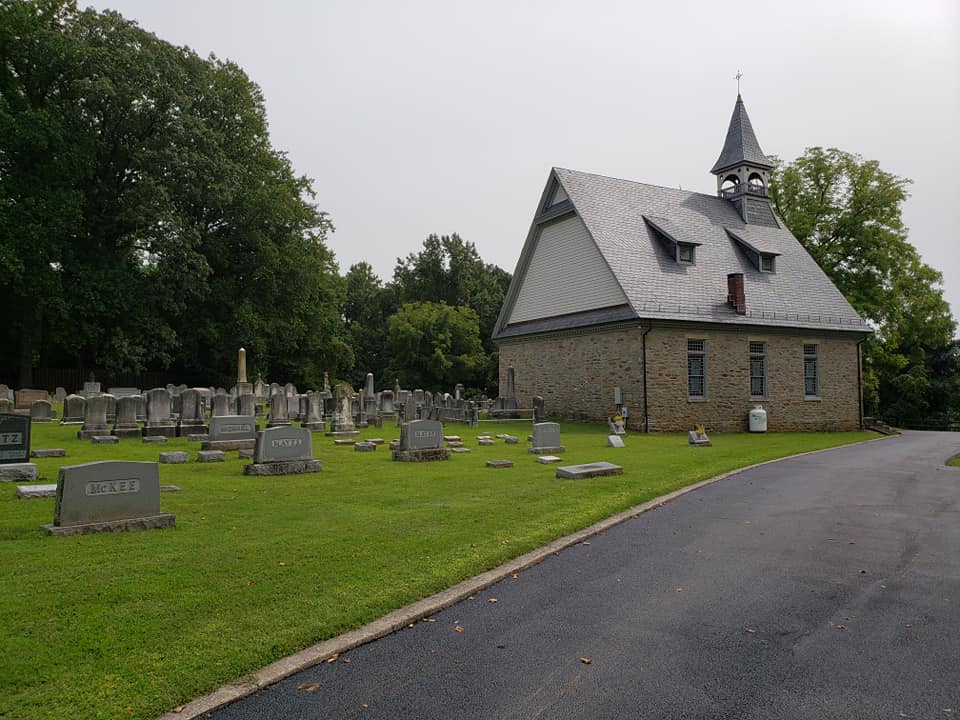 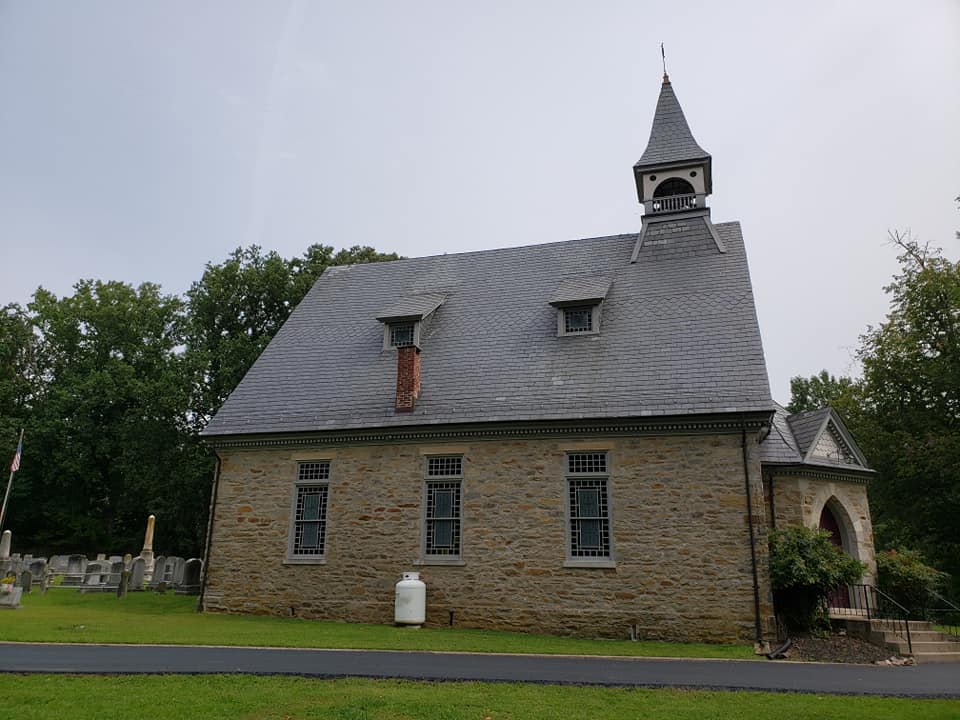 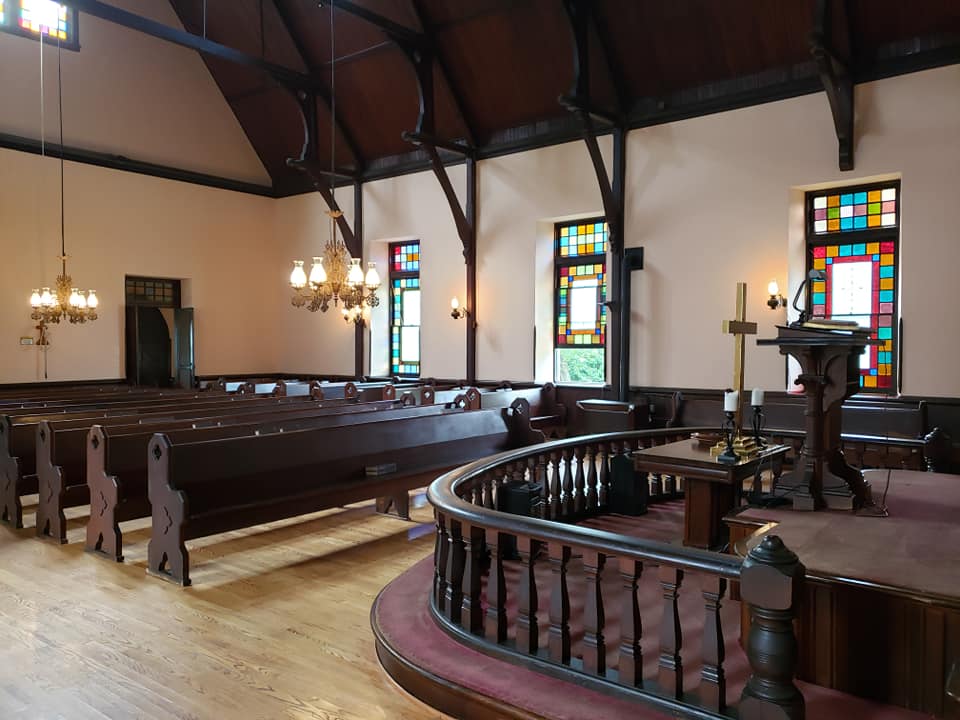 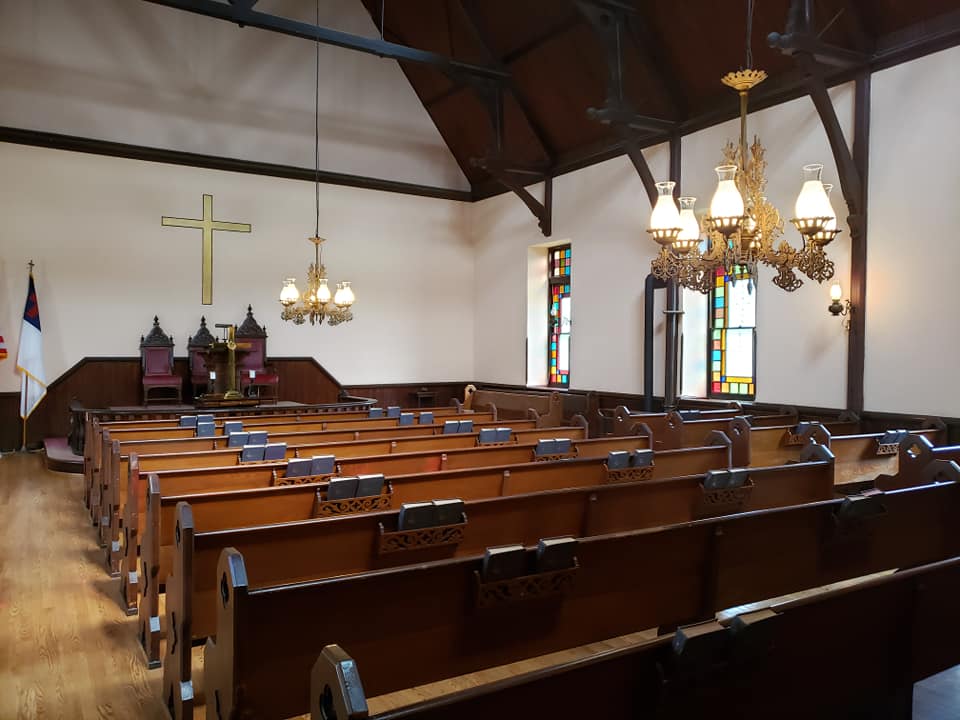 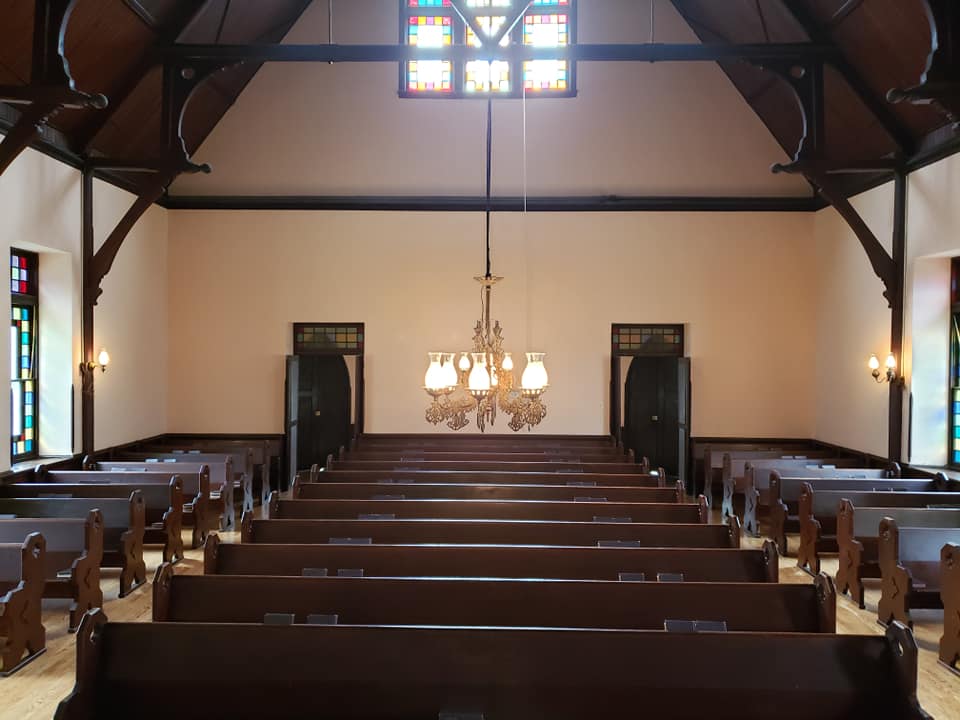 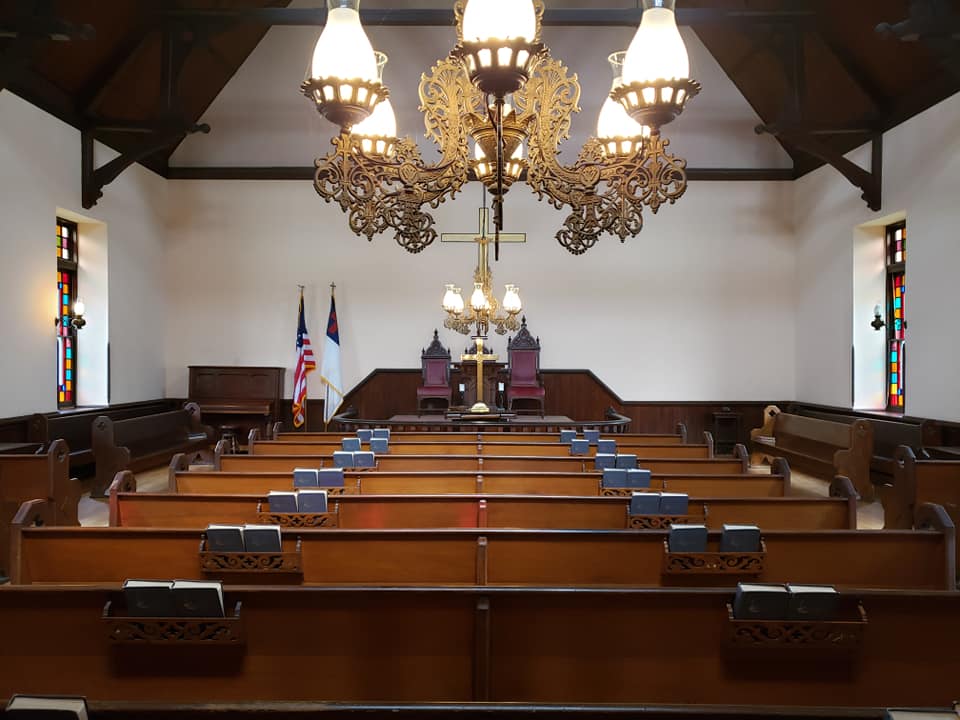 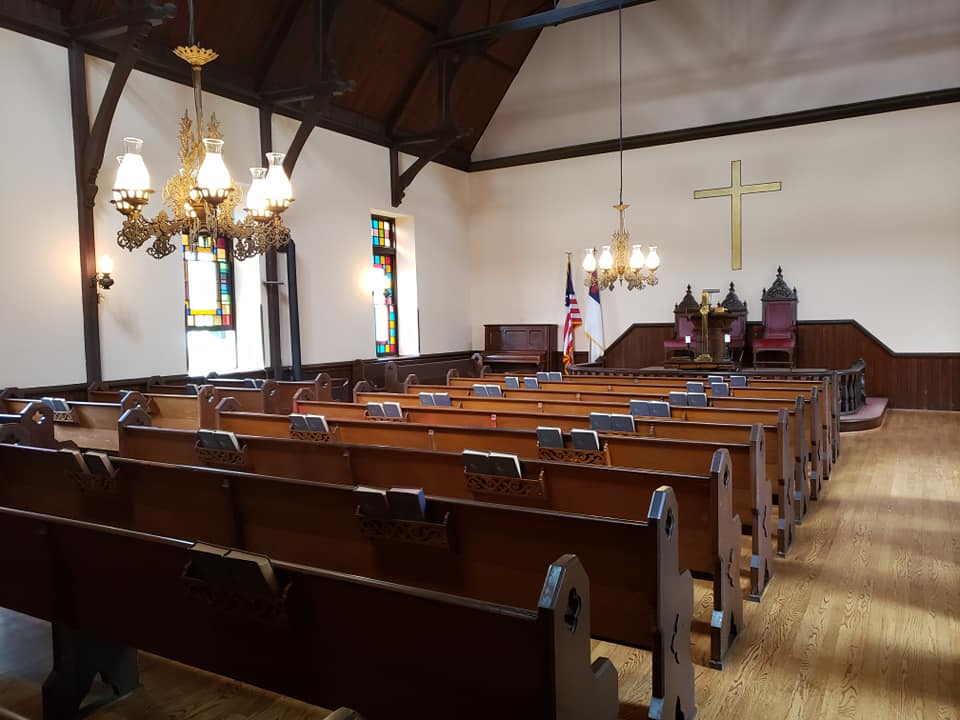